For the first time in many years, Darwin audiences can see the rich diversity and splendour of Balinese art in an exhibition at Charles Darwin University Art Gallery.

Enhancing CDU’s cache of works from the Southeast Asian region, thirty works were gifted in 2016 by the family of avid art collector, curator and scholar Christopher Hill. Among the delights are three paintings by esteemed artist and healer I Ketut Liyer, who gained international celebrity when a character in the popular film Eat, Pray, Love was based on him.

Another painting, Bom Bali by I Dewa Putu Mokoh, is thought to be the only work by a Balinese artist that depicts the horror of the 2002 Bali bombings.

A further twenty works were gifted in 2018 from the extraordinary collection of Michael Abbott AO QC, including a keris charged with powerful magic, and a selection of increasingly rare and valuable masks and sculptures crafted in the early 20th century. A full set of vintage Wayang Kulit shadow puppets was also gifted, featuring characters and celestial weapons from traditional Balinese stories as well as the Hindu epics Ramayana and Mahabarata.

The exhibition also features loans from private collections, as well as from the Art Gallery of South Australia and Museum and Art Gallery of the Northern Territory. 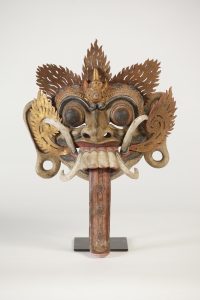