Conference 2019: The Role of the Civic University in Australia: the Making of a City Region.

11 Sep Conference 2019: The Role of the Civic University in Australia: the Making of a City Region.

Posted at 07:43h in Conference, News by Karen Daley
Share

The ‘Great Transformation to Come’.

Reflecting on the range, the reach and the depth of contributions made to this ground-breaking conference it is striking just how far we have come in defining and shaping a concept of engagement. Universities in Australia are building the future as part of a new economic and social order and the scope of issues and themes addressed at this year’s conference was literally breath-taking. From the intellectual issues of a post-truth world to university communities, towns and cities of future Australia; and from action strategies for economic development to the meaning of civic life – the 80 strong senior university leaders and practitioners in attendance at EA’s conference themed the Role of the Civic University in Australia: the Making of a City Region, were treated to insightful, stimulating and at times controversial debates and ideas. Ideas and innovations tested in healthy and open debate and put into the public domain are the lifeblood of democratic engagement – this is EA’s unique role.

The contributions to this year’s conference helped us to think through difficult challenges and reach decisions in our ‘heimat’ – our own place and locality and culture where it will be meaningful – or not! Both our Keynote Speakers Professors Bell and Holmes acknowledged that ‘place’ will continue to play a vital role in our future even though we shall be interconnected globally. We were reminded of the power of locality by the fact that fabulous university city regions would not exist if it had not been for the determination of local communities (the Federal Government of the day did not support the development of a university in Western Sydney – WSU was a recent reincarnation of UWS – nor did it support Griffith’s Gold Coast campus).

Senior practitioners were enlightened by a myriad of ideas and innovations from universities across the country and overseas that could then be ‘tested out’ back in their own place.  These included SCU’s ‘live ideas’ program; UTS’s shopfront model; and La Trobe’s ‘buddy benches, co-labs and flipped student mentoring scheme’ – to name but three!

Cutting edge case studies presented at the conference shed new illuminations on how universities had positioned themselves as the ‘economic engine rooms’ of our future towns (Victoria) and cities (Adelaide, Bolton, Flinders, Griffith, La Trobe and WSU). These wonderful stories demonstrated just how universities, as massive economic generators of wealth and social capital in their own right, were contributing significantly to the building of their cities and regions.  Education is now the third largest generator of GDP in Australia and has a vital economic role to play.  This year our conference asked of it – How are you helping to shape the new social role of the modern civic university?

In her opening keynote to the conference, Professor Bell reminded us that not everybody views their sense of place as a ‘virtue.’  Universities needed to work hard at being ‘anchored’ in their communities with a view to building a positive sense of place among all stakeholders.  She argued that a two-speed approach was required ‘living both fast AND slow’ in order that universities could, as our international keynote speaker, Professor Holmes commented,

‘pull themselves and their city regions up by the boot straps!’

Professor Holmes took us on an historical journey that saw the first civic universities created in the North West of England in the early 19th Century – forward to today where a British University has just appointed its first ‘Dean of Place.’  To quote Professor Holmes,

How then to raise aspirations through learning and teaching for engagement for the modern civic university in Australia? Professor Martin Betts highlighted some of the challenges and opportunities in his ‘Tale of 3 Cities’ where Griffith resides (Brisbane, Logan and the Gold Coast).  Given the sheer scale and complexity of demands made on the modern civic university boundaries have to be drawn and limits indicated. The Honourable Verity Firth reported on progress of the Australian Carnegie Engagement pilot project that seeks to provide a useful boundary, a civic framework that has engaged half the Australian Higher Education sector (with 20 universities now signed up either as pilot members or observers).  Completion of the pilot phase will enable Australian universities to adopt and adapt this global system to address national priorities such as engaging our First People’s in universities.

Professor Tom Calma AO, Chancellor, University of Canberra, delivered his conference dinner address stating that there is still unfinished business for universities to ‘decolonise’ our education system and create a sense of place and space that truly reflects our nation’s First Peoples historical and cultural perspectives.  He challenged the 150 attendees present to re-imagine a world where every Australian university student benefits from the expertise and ingenuity of the world’s oldest living cultures.  Professor Angela Barney-Leitch, Pro Vice Chancellor (Indigenous Strategy) QUT, highlighted the importance of planning at every level as a way for universities to move past reconciliation to integration.

As well as planning, other helpful strategies and tactics were identified by presenters as essential in the senior engagement professional’s toolkit.  Professor Joanne Scott mentioned a ‘small wins’ philosophy – engagement by ‘stealth’ if you will, which can prove to be an effective strategy.   Callista Thillou and Erin Ruff reminded us of the importance of protecting the university’s distinctive ‘identity’ which could be under threat in times of rapid growth.  Flinders University had recently re-visited the original vision and values of their namesake Matthew Flinders in order to re-imagine their point of distinction in modern times as they embarked on a massive growth strategy to transform their city region. Professor Jessica Vanderlelie highlighted the importance of leaving room for innovation when ‘boundary spanning’ citing KODAK as an example of the dangers of complacency.

Belinda Robinson, Vice President of Canberra University, challenged delegates to consider what it meant to be a ‘truly’ civic university – one that was ‘embedded and rooted’ in the community.  Truly civic universities focus on engagement through learning and teaching, re-shaping social knowledge to fit the emerging concerns of the contemporary world. It is in this spirit of public and democratic education that university city regions are being transformed leading to a better role for universities and better outcomes for students of all kinds.

The role of the modern civic university in Australia then, offers a route which says we should examine what we do and think in order to produce insight and understanding which can change and transform our cities and regions through the creation of knowledge for a social purpose.  This year’s conference focused on developing and strengthening partnerships for economic and civic benefit; on the culture of learning, the social significance of the institution (the university as a social network) and the need to personalise our learning in an age of mass education which shows a capacity for de-humanising and depersonalising our learning experiences.

Presentations from universities across the nation and overseas illuminated these and other concerns through reference to the intellectual and intensely practical work by academic leaders who have created new approaches and opportunities towards civic engagement that have transformed communities, cities and regions.  All of these themes embedded within the concerns of our conference are in effect ‘hypotheses’ to be tested, debated and changed as we try to define and solve problems together.

The focus on Australia’s 1.4 million game changing students was highlighted throughout the conference including contributions on service learning and WIL-Plus.  As Professor Bell pointed out in her opening keynote, if ‘Toxic’ was the 2018 Word of the Year (judged by the Oxford English Dictionary) then ‘Anthropocene’ was likely to be the 2019 Word of the Year, as our game changing students rise to the single and unifying challenge that is the great transformation to come for the modern civic university – that of SUSTAINABILITY. 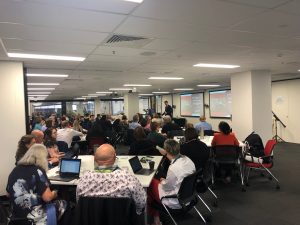