From its humble beginnings in Central Queensland in 2001, the 10,000 Steps project is now recognised as an effective physical activity promotion program both nationally and internationally. Its resources and research have been adopted worldwide with similar projects now operating in countries such as Canada, Belgium, and the UK; and this adoption continues to grow.  The project currently has over 428 000 members, with approximately 2 800 new members joining each month. 10,000 Steps members have lodged over 223 billion steps, about 44 million steps every day.

The aim of 10,000 Steps is to increase the day-to-day physical activity of individuals by encouraging the use of a step-counting pedometer or activity tracker (e.g., Fitbit, Garmin). The project tagline, ‘Every Step Counts’, emphasises the importance of accumulating steps throughout the entire day and encourages users to increase their awareness of how active they currently are and set themselves a daily step goal, recognising that all physical activity contributes to health and some activity is better than no activity. The effectiveness of the project is evidenced by the ongoing support and engagement with State and Local Governments, Hospital and Health Services, non-profit organisations as well as the ever-increasing number of individuals, workplaces and communities embracing the concept and using the project resources.

The 10,000 Steps project now works with organisations from Local Government, Hospital and Health Services, to workplaces and non-profit organisations to assist in promoting physical activity continuing to motivate local communities, workplaces and individuals to increase their physical activity levels. It is supported by evidence that physical inactivity is contributing to the development of chronic diseases, such as cardiovascular disease, diabetes, obesity, some cancers and poor mental health.  It became the first physical activity project to demonstrate the effectiveness of a community-wide approach to promoting physical activity, from the individual level, through to environmental and policy levels, and over 35 peer-reviewed scientific journal articles have been published to-date based on data gathered from the project. 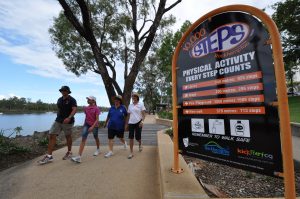