Posted at 14:50h in News by Karen Daley
Share

Monday, June 22 2020 — This week The New Social Contract podcast speaks to UTS Vice-Chancellor Attila Brungs and Shadow Minister for Education and Training, Tanya Plibersek, on their different visions for higher education in Australia in the face of the COVID pandemic.

This seventh episode in the podcast series is titled The purpose of universities in the 21st Century – A Vice-Chancellor and Shadow Education Minister’s Perspective.

The UTS Vice-Chancellor Professor Attila Brungs tells The New Social Contract that universities need to drive jobs growth in ways they have never done before. 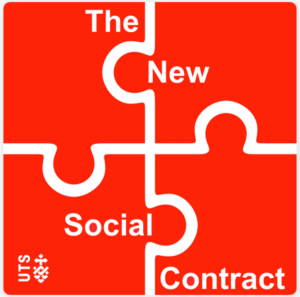 “That’s a real shift for UTS because I’m thinking about the economy five, 10, 15, 20 years out. Universities often only focus on providing the skills for jobs, but I think it’s now incumbent upon us to try and help create that whole  cosystem to drive jobs,” he said.

Vice Chancellor Attila Brungs continued saying that a narrow focus on funding costs of the higher education sector will run the risk of shutting out broader sections of society from accessing university education.

“My biggest concern in the next little while is if you focus too much on costs, you can take yourself down a path that returns universities to a very elite, small amount of education. A lot of the commentary I’ve seen in the media at the moment would take Australia to a place where – I’ll be quite blunt – the rich upper echelons of society get a great university education. Everyone else gets a poor education. And there’s very much a schism in our society,” says Vice Chancellor Attila Brungs.

Shadow Education and Training Minister Tanya Plibersek also sat down with The New Social Contract during a very busy sitting week at Parliament House, and echoed this sentiment.

“I think what our society should be demanding of universities is that universities give as many people an opportunity to get a great education as possible. That education doesn’t depend on where you live or who you are. It depends on your willingness and your capacity to work hard,” said Shadow Minister Tanya Plibersek.

The Shadow Minister also says adequate funding of research is a prerequisite to ensure a successful new social contract between universities, the government and the public.

“So we know that universities are responsible for discovery, innovation, that the research agenda of universities has been a huge driver of our economy. And I think at this time in particular, where we see research funding hitting absolutely rock bottom levels, that’s another area where the compact between the government, universities and our society needs re-evaluation,” continued Shadow Minister Tanya Plibersek.

“We need to make a decision whether we as a community, as a society, as an economy, actually value the research that’s been going on in universities, so we have to fund it. Again, we can’t continue to cross subsidise it and then criticise universities for an overreliance on international students,” she continued.

Vice Chancellor Attila Brungs believes that responsibility also lies with universities to listen to and engage with the public to adequately solve the complex issues facing society.

“To be harsh on me and universities in the past, sometimes we had this great research. Came up with wonderful theories. We wrote a paper about them. We maybe flicked them to government and hoped the government would do something about them. And then sat back, feeling warm and fuzzy that we’ve helped society. That time is long passed,” said Professor Attila Brungs.

Universities’ core responsibility, according to Shadow Minister Tanya Plibersek, must be a reciprocal approach of developing both the individual and society.

“It’s a nourishing of the individual and a nourishing of our society. That’s the responsibility of universities if you strip it all away. It’s giving every person the opportunity of developing their mind, their spirit, their understanding of the world, their passions. But it’s also giving us, as a society, a way of developing our economic wealth and our intellectual wealth as well,” concluded Shadow Minister Tanya Plibersek.

The New Social Contract is a podcast that seeks to contribute to a national conversation on how the relationship between universities, the state and the public might be reshaped as higher
education lives through the COVID-19 pandemic.The podcast is produced by Impact Studios, an audio production house that combines academic research with audio storytelling at UTS.